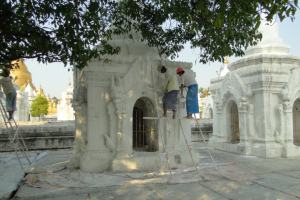 While readers saw in last week’s post that risk management in Thailand is alive and well, this is not the case in Mandalay, Myanmar’s second largest city.

As in many countries, city sidewalks present somewhat of an adventure. In Myanmar, holes and irregularities of surface present a major problem for pedestrians. See photos 1, 2, 3. Photo 11 shows that you need to look ahead as well as down—the sign is safe only if you are extremely short.

illustrate this very graphically. In addition, sidewalks are generally blocked with motorcycles, autos, and vendors – necessitating pedestrians to walk in the street where traffic is heavy and fast. Couple this with the fact that streets are poorly lit at night and that drivers drive on the left side of the road so the pedestrian can get confused as to the direction from which traffic might be coming.

Photo 4 shows low hanging power lines and Photos 5 and 6 show support braces and guy wires obstructing the sidewalk. In other words, watch out while using sidewalks.

Workers are shown at risk in Photo 7 where workers are performing on rickety scaffolding. OSHA (Occupational Safety and Health Administration) regulators might have some concerns.

Myanmar is a land of Buddhist temples. It is important to watch your step. Photo 8 shows a low metal obstruction sometimes found. It is a good trip hazard or a toe breaker – because neither shoes nor socks are allowed within the temples. Photo 9 shows a steep staircase.  Photo 9 shows a sign prohibiting/requesting tourists from going to the top of an unfinished Stupa. Photo 10 shows tourists ignoring the sign and climbing to the top.