Is Your Waiver Adequate?

A waiver can protect you from liability for injuries–-even if the injury was caused by your NEGLIGENCE. But, many waivers fail to protect when challenged in court!

Want to find out if your waiver is likely to protect you? Email us a copy of your waiver (and the state you live in) for a Free Evaluation of Your Waiver.

Get a free evaluation...

In a recent Vermont case, Melissa Lenter entered her horse in a fifty-mile endurance ride. Prior to the event, Lenter signed the following waiver of liability:

[I]n consideration of your accepting this entry, I hereby for myself, my heirs, executors and administrators, waive, release and discharge the Vermont Adaptive Ski and Sport (VASS), ECTRA [(Eastern Competitive Trail Riding Association)], AERC [(American Endurance Ride Conference)], all persons assisting or connected with the ride, and all landowners, their representatives, successors and assigns, from any and all rights, claims, or liability for damage, for any and all injury to me or my property or those arising out of or in connection with my participation in this event. I further agree that I will defend, indemnify and hold harmless the Vermont Adaptive Ski and Sport (VASS), ECTRA, AERC, its members and agents, or any of them against all claims, demands and causes of action, including court costs and attorney’s fees, directly or indirectly arising from any action or other proceeding brought by me or prosecuted for my benefit contrary to this agreement. This release extends to all claims of every kind and nature whatsoever, whether known or unknown, and I expressly waive any benefits that I may otherwise have under provisions of the law of Vermont relating to the release of unknown claims. I understand that this release constitutes a limitation on my legal rights. The undersigned verifies acceptance of risks and responsibilities for the rider’s and horse’s condition….

I understand that if the horse I am riding is pulled for metabolic reasons and requires treatment on site or additional recheck by ride vet, this horse may not leave base camp until released by an authorized ride vet.[Bold added.]

The event had stops every 10 to 12 miles to check the health of the horses. During the event at the second health check, Lenter decided to take her horse from the event because she was concerned with the behavior of the horse. The horse was checked by Dr. Johnson who decided to administer so fluids to the horse. While the horse was laying down, Lenter crouched “within arm’s length of the horse’s head, and she held Emu’s lead line while the doctor attempted to administer the fluids with a catheter. After about one liter of fluids had been administered, Emu had a seizure and rolled over onto plaintiff, breaking Lenter’s leg.”

Lenter filed suit against Dr. Johnson alleging negligence in that she let Lenter so close to the horse during treatment. The trial court granted summary judgment in favor of Johnson and her veterinary practice. The case was appealed (Lenter v. Clover Acres Livestock Veterinary Services, LLC, 2022). The defense claimed protection based on the liability waiver; the trial court agreed stating “the release in question was unambiguous and sufficiently specific to bar the negligence claim here. It explained that the release covered “any and all rights, claims, or liability for damage” and its language regarding the causal nexus mirrored language in other cases where negligence claims were found to be barred.”

The appellate court agreed with the trial court “. . .  that the release unambiguously bars plaintiff’s negligence claim here.” [Reread the bold phrases in the waiver to see why the court said it was unambiguous.] It explained that “. . . a valid contractual limitation on liability creates an absolute bar to a plaintiff’s recovery.” It said that waivers are disfavored and must be scrutinized closely; to be enforceable, waivers must meet “high standards for clarity.” It also made clear that waivers do not have to use the word negligence, but “that in its absence, there must be words that convey a similar intent.”

The appellate court affirmed the ruling of the trial court in favor of the defendant.

The waiver used proved effective in protecting the defendant. Keep in mind, however, that had the waivers used the term “negligence”, the case might not have even made it to court.

Also, keep in mind that the law varies among the states and the same waiver would not have protected in about fifteen or so states. In those states, it is clear that a waiver that does not specify protection against “negligence” will not be enforced. Know your state law – and why not include “negligence” just to be on the safe side.

by Doyice Cotten Heather Goss elected to participate in a multi-day cycling race put on by two inexperienced groups (GCSC and CWRU, a student led cycling club). The race was on a closed-loop and was designed by mostly inexperienced members of the two organizations. Prior to the race, Goss signed two waivers the said essentially the same thing. One of the documents follows:  I acknowledge that by signing this document, I am assuming risks, agreeing to indemnify,... [read more]

By Doyice Cotten Carla Dempsey and her husband went on a snorkel tour with Wild Side Specialty Tours. Prior to departure, the Dempsey’s signed a release and waiver of liability. After snorkeling, Mrs Dempsey slipped and fell while walking on the deck while wearing wet snorkeling fins. Dempsey in time filed suit against the tour company claiming negligence in failing to properly instruct and warn passengers about the use of fins aboard the vessel (Dempsey v.... [read more]

By Doyice Cotten Harry Boldt chartered a fishing boat and signed a liability waiver. While on the trip, the boat hit an unexpected 8 foot wave that knocked Boldt from his seat causing injury (Boldt v. Taylor, 2022). The waiver read: I understand that the purpose of signing this document is to GIVE UP ALL of my rights to sue Reel Reaction Sportfishing LLC, and any of their EMPLOYEES, AND ALL OF ITS BOATS (WHETHER OWNED,... [read more]

By Alexander “Sandie” Pendleton In a long-awaited decision, the Minnesota Supreme Court has ruled unenforceable a parental waiver agreement signed by a mother of a seven-year-old boy who was seriously injured at a commercial indoor play area. While not holding that all such agreements are void as a matter of law in Minnesota, the court refused to enforce the agreement, finding it failed to express “a clear and unequivocal intent to release” the company that owned the play area from its own negligence.... [read more]

By Doyice Cotten In June, 2020, Harry and Patricia Boldt joined a chartered fishing tour operated by Reel Recreation and led by Captain Taylor. They signed liability waivers intended to release the charter company from liability for negligence. The seas were calm when an 8 foot high wave struck the boat injuring Mr Boldt. Boldt filed suit claiming negligence, loss of consortium, and vicarious liability. The defendant moved for summary judgment based on the waiver signed by the plaintiff.... [read more]

Parental Waivers are not enforceable in New Jersey; But Parental Arbitration Agreements are!

By Doyice Cotten Reese Sayre was four years old when her father took her to a trampoline park. On entering, he signed an electronic agreement in which he agreed to arbitration in the event Reese was injured.  The agreement stated that the father was waiving his child’s right to bring a claim in court against the park’s owners, employees, and agents and the child could pursue claims only through binding arbitration. Reese broke her leg jumping on a trampoline and now appeals an order granting defendants’ motion to dismiss her personal-injury complaint and compelling her claims to arbitration.... [read more]
Read More Articles: Waivers • Risk Management • All Topics 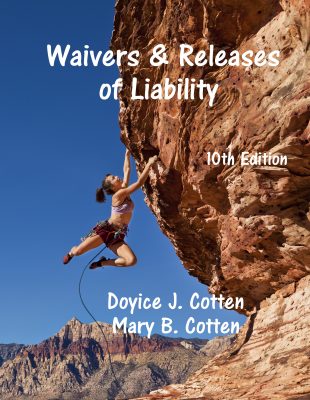 Dr. Doyice J. Cotten is an emeritus professor of sport management at Georgia Southern University where he taught graduate and undergraduate courses in sport law and risk management. Dr. Cotten served as president of the Sport and Recreation Law Association. His books include Waivers & Releases of Liability (9th ed.) and Legal Aspects of Waivers for Sport, Recreation and Fitness Activities, as well as the popular sport law textbook, Law for Recreation and Sport Managers.

Are you an owner or a manager of a sport, fitness, or recreation business? Are you an attorney who writes waivers? Are you an insurance professional in the area of sport? Or are you a professor who teaches sport law? If so Sport Risk Consulting Offers …