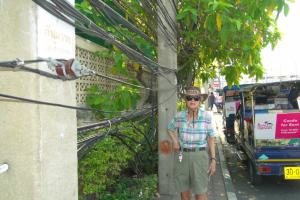 As regular readers know by now, risks faced by locals and tourists in foreign countries abound. Hazards that you would never (or at least seldom) see in the US are both common and dangerous. I guess there just aren’t as many lawyers in those countries. Sometimes, however, we see where authorities have also spotted these hazards and have taken action.

Some hazards we spotted at popular tourist attractions in Thailand are pictured below. Photo 1 illustrates a warning in a museum to watch your head – probably not a deadly hazard, but the sign can prevent a bump and bruise. Photos 2 and 3 were found at the Bridge Over the River Kwai – a popular tourist sight. First, there was a warning near the entrance to the bridge and the bridge itself. In other words, look out for trains.

A couple of interesting shots from Erawan National Park near Kanchanaburi were found. The major attraction was a series of 7 waterfalls. At the fourth falls, there was a “sliding rock” attraction where visitors could slide down a large rock into the water. Nearby was a long pole and a ring for use in the event someone was drowning (see Photo 4). Also in the park, visitors pass over a footbridge that has no rails and is several feet above the water and rocks below (see Photo 5).

Of course hazards are generally plentiful around hotels. In our hotel one hazard was noticed – pretty green tiles on the pool deck (see Photo 6). Very pretty, but they were also very slippery when wet. While the hotel missed that, it did foresee a more important risk. The stairs were constructed with non-slip surfaces at the edge. Also, with the stair in two colors, they were more easily seen and falls were less likely (see Photos 7 and 8). A good thing since the hotel had no elevator. Finally, Photo 9 shows the non-slip surface in a corridor where there was a slight change in elevation.

Some hazards that affect local as well as tourists were also identified. Photo 10 shows a sidewalk where the surface is uneven and an accident is likely if one is not careful. To be fair, however, the sidewalk was not completed and that hazard will probably be corrected before the reader visits. At the pier in Hua Hin, it was amusing to see the sign in Photo 11 next to an open gate. And of course, there are the common low-hanging power lines (see Photo 12).

No hazard, but I thought readers might enjoy a road sign we saw in Thailand near Kanchanaburi (see Photo 13). Try to avoid collisions.