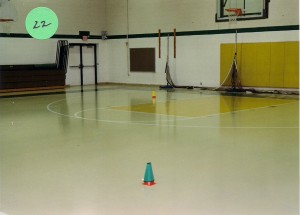 This case account was prepared by Tom Bowler, an experienced expert witness in the area of physical education.

Fact Pattern: Within a mandatory physical education class for middle school students, an eleven and one-half [11 ½ ] year old girl was involved in a warm-up activity on February 15, 2007. She was with three or four girls inside a bungee type of cord held around the back of their hips. The given objective by the physical education teacher was to go around in a circle and spin. The plaintiff’s group was moving in a circle while spinning, jogging and running. In doing so, the plaintiff student bumped into a volleyball standard, which was previously set up by the physical education teacher. As the pole fell, one of the fastening bolts struck her in the right knee sustaining a severe two by two inch laceration to her leg.

Final Analysis: The middle school physical education teacher recognized the hazard of the positioning of the poles on the gymnasium floor, since he warned the students about them, prior to the activity. This is significant since the danger was certainly observed by the teacher in charge of the activity. There were six [6] groups of approximately four students moving in the gymnasium. They were within their circular bungee stretch ropes moving at the same time the volleyball standards were in place for the next activity. It was foreseeable a group of students could bump into one of these portable standards.

As a former physical education teacher, I recognize the need to have smooth transitions between activities. I also recognize the need to have equipment and supplies in place to save on “down” time. However, the danger comes when setting up two activities incompatible with each other. First of all, the cooperative small team resistance activity of moving together within a bungee type stretch rope has little correlation to volleyball as a warm-up activity. If the teacher wanted an activity to develop cardiovascular endurance within this half gymnasium, a myriad of other activities could have been instituted with limited space.

Immediately, the concept of “Nine Innings” comes to mind. Within this cardiovascular activity, no equipment or supplies would be necessary. The student stands in one spot on the gymnasium floor. [All the students can be dispersed throughout the half gymnasium, without movement taking place. Therefore, there would be no risk of moving into stationary poles]. The teacher then at a command would ask the students to run in place for X amount of minutes. After this segment of time is over, the students would rest for the same amount of time, thus, constituting one inning of running/resting in place. After nine [9] innings, the warm-up would be completed. In this simple drill, the objective of the instructor, albeit not a cooperative activity, however a cardiovascular activity would be accomplished.

In writing my report for this incident, I cited two areas of contention. Certainly, inappropriate instruction was one area for scrutiny. The middle school physical education teacher did not instruct the students in the proper use of the cooperative stretch rope bands. In doing my research for this case, I purchased the commercial VHS tape of the stretch bands used for this activity. Nowhere, did the instruction include running and jogging cooperatively. The stretch rope bands were to be used for resistance type of work.

Additionally, in writing my report, I cited inappropriate supervision, since the teacher had the foreseeability to know that it was possible that students could impact a pole while moving within the space. If the other half of the gymnasium was not being used, this activity may have been appropriate, since there would have been no volleyball standards and nets in place.

Final Resolution: I was never deposed within the case. The case never went to trial. The case reached a settlement. The final settlement figure is unknown to me.

Tom Bowler is a consultant doing business as Total Playground Consulting Services located in Merritt Island, Florida and Manchester, Connecticut. Tom consults with plaintiff attorneys, as well as defendant attorneys throughout the United States as an expert witness. He has consulted on approximately 300 cases within the last 18-19 years. These cases range from playground equipment cases to athletic cases to physical education cases. Tom taught elementary physical education for thirty-three [33] years, prior to his “retirement” in 1999. For six and one-half years, Tom supervised student teachers in physical education on a part time basis for a local university in Connecticut. His experience with supervising student teachers was at the elementary, middle school and high school levels. Tom also served as an adjunct lecturer for another university in Connecticut teaching an undergraduate course to exercise science majors in “tort law” and a graduate course in “sport law”.