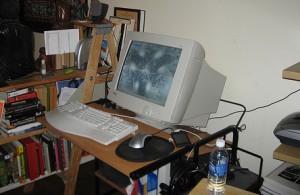 standard player registration on the USA Hockey website annually. To complete the registration, she had affirm her agreement to the terms by inserting her initials on the webpage with a liability waiver and release. She subsequently sustained injuries during a USA Hockey-sponsored game and sued USA Hockey.

In reply, USA Hockey did not produce an original, duplicate, or screen print out of Berenson’s application; rather, USA Hockey submitted an affidavit from one of its employees who testified that it was impossible to complete the online registration process without executing the page with the waiver and release. The employee also confirmed that Berenson completed the online registration the year she was injured.

The trial court granted USA Hockey’s motion for summary judgment since it was undisputed that Berenson could not have completed the online registration without expressly agreeing to the waiver and release.  The court stated “. . . the best evidence rule does not require production of a copy of the electronically executed agreement to the exclusion of all other proof of agreement to its terms.”

Photo Credit: Thanks go to Mrs. Gemstone at Flickr.