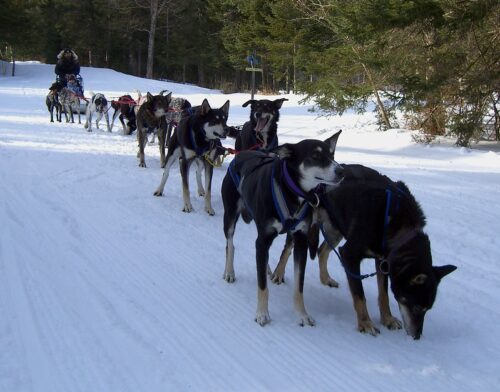 The Sturms (Timothy, his wife Sandra, and their daughter Holly) decided to take a dogsled ride and prior to the ride, the two adults signed a liability waiver described as a Participation Agreement. During the ride, the driver of  Sandra and Holly’s sled lost control and the sled hit a tree causing serious injury to Holly.

Sandra had signed the agreement on her own behalf and the parties disagree as to whether Timothy signed on behalf of Holly.

The Participant Agreement provides two spaces for signatures: one for customers 18 years of age and over to sign for themselves, and one for parents or guardians to sign on behalf of a minor. The section to be completed on behalf of a minor provides a large space with instruction to “print [the] minor’s name].” (Id.) Holly Sturm’s name does not appear on this line on either copy of the Participant Agreement completed by the Sturms. The form completed by Timothy Sturm has “Timothy Whitney Holly” written at the bottom of the page on and near the line provided for the signature of the minor’s parent or guardian.

I hereby agree to release, indemnify, and discharge KKEN, on behalf of myself, my spouse, my children, my parents, my heirs, assigns, personal representative and estate as follows:

The risks include, among other things: . . . losing control of the dogs may result in collisions with other sleds and/or manmade and natural objects such as bridges, trees, rocks, cliffs, streams and other obstacles; . . . equipment failure; . . . I understand that sled dog touring is a wilderness activity that exposes me to all elements of the outdoors and natural surroundings.

Furthermore, KKEN employees have difficult jobs to perform. They seek safety, but they are not infallible. They might be unaware of a participant’s fitness or abilities. They might misjudge the weather or other environmental conditions. They may give incomplete warnings or instructions, and the equipment being used might malfunction.

By signing this document, I acknowledge that if anyone is hurt or property is damaged during my participation in this activity, I may be found by a court of law to have waived my right to maintain a lawsuit against KKEN on the basis of any claim from which I have released herein.

I have had sufficient opportunity to read this entire document. I have read and understood it, and I agree to be bound by its terms….

In consideration of (print minor’s name) (“Minor”) being permitted by KKEN to participate in its activities and to use its equipment and facilities . . . I further agree to indemnify and hold harmless KKEN from any and all claims which are brought by, or on behalf of Minor . . . connected with such use or participation by Minor.

Under Colorado law, an exculpatory agreement cannot shield against willful and wanton acts or omissions, but can protect against liability for negligence providing the agreement meets the 4 requirements established by Jones v. Dressel, 623 P.2d 370 (Colo. 1981). Also, in Colorado “A parent of a child may, on behalf of the child, release or waive the child’s prospective claim for negligence.”

The Colorado Supreme Court has established  the following four factors to be met when determining the enforceability of an exculpatory agreement: “(1) the existence of a duty to the public; (2) the nature of the service performed; (3) whether the contract was fairly entered into; and (4) whether the intention of the parties is expressed in clear and unambiguous language [collectively, the ‘Jones factors’].”  An exculpatory agreement “must satisfy all four factors to be enforceable.” In this case, there was no issue with the first three factors, but the court examined the waiver relative to the fourth factor in great detail and ultimately ruled that the waiver met the requirements for enforcement.

What should have been an effective defense based on the waiver sort of floundered because of the way the waiver form of the father was filled out. First, the mother did not sign her waiver “on behalf of her daughter.” So, the mother’s waiver is irrelevant. The father botched up his waiver. Who knows what he was thinking. Then, he wrote Timothy Whitney Holly at the bottom of the page near the line provided for the signature of the minor’s parent or guardian.

So the issue was: Did the father sign the document releasing the defendant from liability for negligence?

It seems that perhaps the father was confused at the time of signing. Or was he trying to avoid releasing the defendant from liability? In any event, at this point, the court has not granted summary judgment for the dogsled company. But hold the line … there’s more to come.

For more discussion of this case, I suggest you check with Jim Moss’s post on Recreation Law for more detail. There, you will also find the entire case. Go to  Recreation-Law.com

In this case, the defendant had the state waiver law on its side. The defendant had a good waiver capable of protecting against liability for negligence. What the defendant did not have was careful administration of the waiver. What good is a waiver if the person does not sign it? NO Protection!!! When the waiver is signed, the employee administering the waiver should check and see if everything is properly signed and filled out. Here, we and the court wonders, Who is Whitney?  It makes me think of the question: “Who is John Galt?”