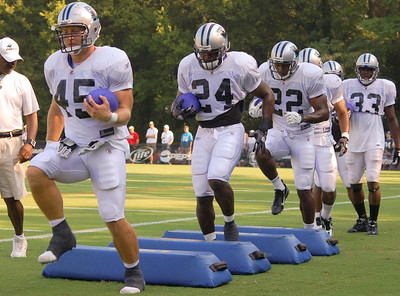 A morning at the Carolina Panther’s Training Camp at Wofford College in Spartanburg, S.C. on 8/10/2009

It was not until 2019 when the question was answered. In Feleccia v. Lackawana College (2019), the Pennsylvania Supreme Court ruled on the issue in a case involving a football injury. The two major issues were the use of a questionable drill (Oklahoma Drill) and the failure to provide qualified medical personnel.

The court stated that “gross negligence does not rise to the level of the intentional indifference or ‘conscious disregard’ of risks that defines recklessness, but it is defined as an ‘extreme departure’ from the standard of care, beyond that required to establish ordinary negligence, and is the failure to exercise even ‘scant care.’” The court reasoned that gross negligence involves more than a simple breach of the standard of care; rather, it describes a “flagrant” or “gross deviation” from the required standard. It stated that “enforcing waivers of gross negligence incentivizes conduct that jeopardizes the signer’s health, safety and welfare to an unacceptable degree.” This reasoning, which led the Tayer court to rule that public policy prohibits the enforcement of waivers for recklessness, likewise led this court to rule that waivers for acts of gross negligence are unenforceable.

Pennsylvania waiver law is much clearer in light of these two cases. Waivers of liability for injuries resulting from ordinary negligence are enforceable in the state; however, Pennsylvania public policy prohibits the enforcement of waivers for actions of gross negligence or recklessness.