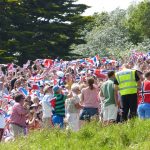 Spectators Tory Baughan and Megan MacNeill were injured while watching a snowmobile “hillclimb” racing event. They were in the designated, but unprotected, spectator area when one of the racers became dismounted from his Polaris snowmobile on his way up the hill. The driverless snowmobile continued to travel back down the hill at a high rate of speed before colliding with plaintiffs. Baughan sued claiming negligence, premises liability, gross negligence, and willful and wanton misconduct (Baughan v.