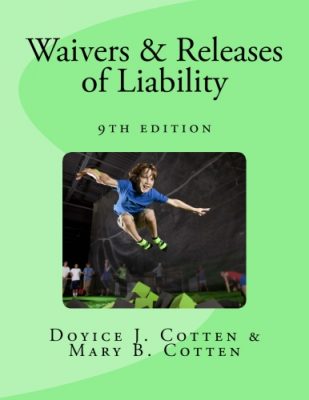 Where there are fitness, recreation, and sport activities, there are injuries! Unfortunately, where there are injuries, there are lawsuits! Providers of these activities must take care to manage risk in three ways.  First, the provider should institute a sound risk management program which includes an approach toward reducing the likelihood of injury as much as possible.  Secondly, they should purchase financial protection through liability insurance. Third, they should use an agreement by which the client agrees to relieve the provider of liability for participant injury – the document should include an assumption of risk (for inherent risks), a waiver of liability for provider negligence, and an agreement to indemnify the provider for loss.

Liability waivers, contrary to misconceptions of providers in the past, can be effective in protecting providers from liability for injuries resulting from the negligence of the provider.  Waivers are inexpensive to obtain, easy to administer and store, and can help protect providers from the consequences of their own mistakes.

What is a Waiver?

The reader, however, will often encounter other terms such as release, disclaimer, and exculpatory agreement.  These terms are usually used synonymously with waiver and while there are minor differences, they are usually referring to the same type of agreement. Another common document is the informed consent agreement. Although some erroneously use it instead of a waiver, the informed consent is a different type of agreement. It is used to protect the provider from liability for the informed treatment risks of a treatment or program to which the individual agrees to be subjected (e.g., medical treatment, therapy, experiment, training program). In general, they are used when something is “done to” the individual.  These are used in medicine and research and have recently been used by personal trainers.

Does a Waiver Work?

The answer to this is Yes and No.  Waivers do protect the provider in most states, but not all.  In states where they work, they usually work under certain circumstances, but not all.  A number of factors can cause a waiver to fail. Some of these include: 1) When the service is an essential service or of public interest (e.g., medical care, electric or water service); 2) When one party has superior bargaining power over the other (e.g., teacher-student, employer-employee); 3) When the conduct is beyond ordinary negligence (e.g., gross negligence, reckless conduct, intentional acts); 4) When the waiver is to relieve one of a statutory duty; 5) When the waiver is not clear and unambiguous in its intent; 6) When fraud or misrepresentation is involved.

Waiver law is state law and, as such, differs greatly among states. Table 1 lists the states and the author’s estimate of the likelihood that a reasonably good waiver would be enforced by the courts in that state.

From Figure 1, one can see that in most states, a well-written, properly administered waiver, voluntarily signed by an adult, can provide service providers with protection from liability for injuries resulting from the ordinary negligence of the provider, its employees and its agents. It is important that the reader remember three things about the above classification of the states:  1) although the classification is based upon about 1500 waiver cases, the ratings are subjective and subject to disagreement among experts; 2) the law in each state is always subject to change (One new state supreme court decision could change the classification of a state overnight); and 3) regardless of the likelihood of a waiver being enforced, it is suggested that service providers seeking protection from liability in all states utilize a waiver. Why??? Courts can change with time and with the change, there can be a change in attitude toward waivers. Also, while states classified as EXCELLENT generally have fewer requirements for enforcement than POOR states, waivers can fail in each category and occasionally a waiver will be enforced in even the POOR category. In the FAIR and GOOD categories, a good waiver is usually or often enforced.

Likelihood of Courts to Enforce a Liability Waiver

Why do Some Waivers Fail?

In any state, a waiver can fail for a number of reasons. A few of these reasons are explained below.

Language Requirements. The most common reason that waivers fail is because they are poorly written. A key guideline required in all states is that the waiver language be clear and unambiguous. If the waiver does not clearly specify the intent of the parties to release the provider from liability for negligence, the court will not enforce the waiver.  Note, however, that what is considered clear and unambiguous varies from state to state.  For instance, some states require the waiver to state that the signer is releasing the provider from “negligence” and must include the word “negligence.”  Courts in other states do not require, but strongly encourage the inclusion of the term. Still other states simply say that as long as the intent is clear, the specific language is unimportant and accept such language as “release from any and all claims.”

Extreme Acts. Courts in most states enforce waivers of liability only for “ordinary negligence.”  Courts in these states hold that enforcement of a waiver when the action resulting in the injury was gross negligence, reckless conduct, willful/wanton conduct, or an intentional act is against public policy.

Unequal Bargaining Power. Waivers are not generally enforced if one of the parties has a clearly dominant bargaining position.  Examples would include a coach requiring a waiver of his players, a teacher and a student, and an employer and an employee. Courts generally hold that recreation, fitness, and sport waivers do not involve a clearly dominant position (e.g., health club waivers, waivers for a rafting trip, waivers to go into the pit area of a racetrack, waivers for skiers, and waivers to play recreational softball in a municipal or church league). Courts generally hold that such activities are optional, the participant does not have to participate, the participant can participate in another activity, and the participant can go to another provider – hence, there is no advantage in bargaining position for the provider.

Conspicuous Language.  Most courts feel that it is important that the waiver language be obvious to the signer.  Preferably the waiver should be on a sheet to itself.  This removes the argument that the signer did not know what he or she was signing.  On the other hand if the waiver is included in the middle of the membership contract or on an entry form containing other information, the signer is apt to claim he or she failed to realize that he or she signed away important legal rights. This problem is compounded when the waiver section of these documents is not highlighted and set off in some way.  Emphasizing the waiver section by using larger print size, a subheading, bold print, or placing it in a box would help (and is required in some states). Failure to do this can result in an unenforceable waiver.

There are many other factors that can cause a waiver to fail – too many to address in this article. But the reader should remember that waivers can protect in most states and it is worth the effort to develop a good waiver and use it for protection.

What if the Client is a Minor?

This question was easier to answer 30 years ago.  At that time, the advice from this author was “Do not use waivers with minors.  Waivers signed by minor or by parents on behalf of a minor are not enforceable!”  Fortunately for providers, this is not always the case.  The law has changed in many states.

It is still true that a waiver signed solely by a minor is unenforceable and provides no protection for the provider.  However, one can see in Figure 2 that in several states, one or more parental waivers have been enforced or there are statutes to that effect.

NOTE: Wisconsin and Connecticut have enforced parental waivers, but later state supreme court rulings make them unlikely to be enforced in the future.

So, what if the client is a minor? There is no downside to using a waiver with a minor client.  Have a parent (preferably both) sign the waiver. If it is not upheld, it still helps with a primary assumption of risk defense – provided you spell out the inherent risks of the activity.

Waivers can be a powerful risk management tool available to service providers; combine it with liability insurance and a continuous program focusing on the prevention of the injury. Though it is often difficult for recreation, fitness, and sport providers to understand, WAIVERS CAN PROTECT THE PROVIDER FROM LIABILITY EVEN WHEN THE PROVIDER IS NEGLIGENT.  In conclusion, a few key points to remember include: