Americans traveling in other countries have the opportunity to see some interesting, and often, unique signage. A few are presented in this post. Some, like the first one, are not usually seen in the United States. The meaning, however, should be obvious.

Some of the signs warn of unique dangers. Others illustrate the difficulty in translating from another language to English. This is particularly true in the Chinese signs. Notice that several of the signs do not depend on translation or reading ability.

I remember on my first trip to Costa Rica, I was driving through a tropical rainforest on a curvy, mountain road when we passed a sign in Spanish. The words were not in our Spanish vocabulary, but we wondered what it said. Around the next curve we came upon a huge pile of dirt in our lane. It was about 5 feet high and almost as wide as our lane. Puzzled, I started around the pile and found that our lane had recently vanished in a mudslide. The sign was ineffective, but the pile of dirt spoke wonders.

Some of the signage is effective, the meaning is lost in some, and some is simply humorous. In any event, at least those in charge are trying to warn us of the danger. Looking at the sign from North Carolina (located next to a small lake), one is just puzzled.

How do your signs stack up? What about for someone who does not read English?

Click on the image to enlarge! Search word: tourism 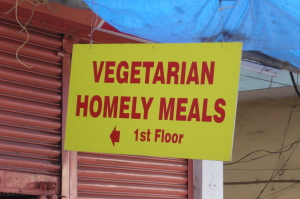